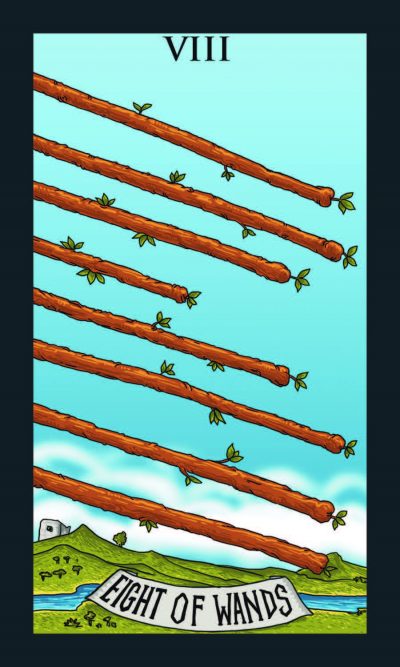 The Eight of Wands is linked very closely to Jupiter, the planet of good fortune. Jupiter represents miracles, healing, and opportunity. This card also has strong ties to the Sagittarius astrological sign, which is linked to adaptability and flexibility. The Wands suit would point towards a spiritual journey.

The Eight of Wands shows eight flying wands, resembling arrows. The wands are starting to sprout, which is a recurring theme in the wands suit of creative energy. There are no mountains or clouds, showing a clear path ahead. There is also a river, signifying emotions and creative energy.

The Seven of Wands told of a large difficulty. The Eight of Wands upright follows up to tell you that you are finally moving past. You may receive some news soon that will change your life for the better. Patience and prudence is what the Eight of Wands would recommend in this time. Now is not the time to make any kind of large decisions, regarding finances or love. Trying to force any time of large commitment from your job or your partner can only turn out negatively when faced with the Eight of Wands.

Should the Eight of Wands appear in reverse, there is a possibility you’re feeling frustrated about a goal you’ve not yet accomplished. You may feel like you’re slowly chipping away at your goals and making progress, only to find that you’re far behind where you thought you would be. In your love life you may be feeling jealous and want to force an ultimatum. The Eight of Wands tells you to remain patient and you will soon be rewarded.

**In a yes/no reading, the Eight of Wands is a yes.