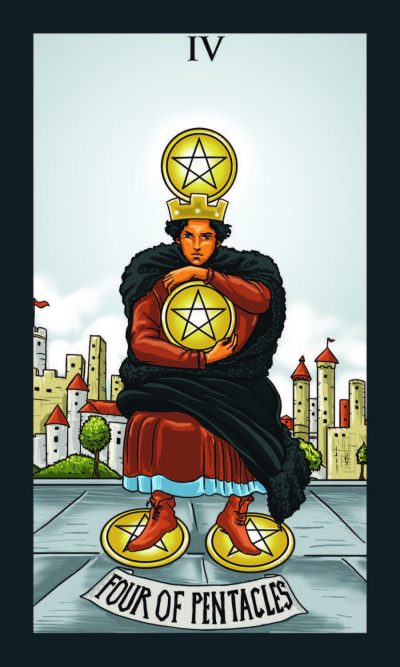 A four of any suit is ruled by The Emperor. It is the backbone of the tarot, as there are four suits in the Minor Arcana. Also on cards in the Major Arcana, such as the Wheel of Fortune and The World, four symbols are visible. And there are four different schools of astrological signs, fire, earth, air, water. The Four of Pentacles also has strong ties to Saturn, which represents boundaries and responsibility. It can be seen as being a very negative omen indicating negative energy ahead. This card is associated with Capricorns, who are known to be strong-willed and ambitious. The Pentacles suit would point towards a journey of fiscal significance.

The card shows a man sitting on a stool. His arms are wrapped around a large pentacle, as if trying to protect it from being taken. He balances another coin on his head, and two between his feet. He appears to be hoarding his coins, as if afraid someone will take them. However, he has become so obsessed with keeping his coins that all of his energy goes towards holding onto his wealth. He cannot even turn his head without losing a coin.

The Four of Pentacles speaks strongly to your relationship with money. Are you spending so much time at work or clipping coupons that you’re missing out on the other parts of your life? You may be passing up on vacations and plans with family or friends that you would find fulfilling because you are preoccupied with saving all of your money. The overlapping lesson to be learned here is to moderate your relationship with money.

The Four of Pentacles Reversed can appear when you’re evaluating your priorities, especially around money. You may be living outside of your means or maybe you’re needing to make a major move to accommodate a new lifestyle or family addition. The Four of Pentacles can sometimes be trying to tell you that you’re spending way too much time at work to keep up with your lifestyle. You may find that if you work in a sales based job you’re putting too much focus on sales and selling something you don’t believe in. Do not sell your soul to your career or lifestyle. Making a clear budget and sticking to it would be prudent advice at this time.

**In a yes/no reading, the Four of Pentacles is a yes.