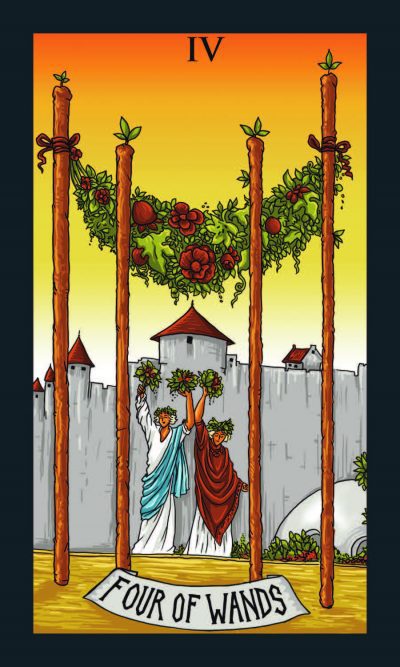 A four of any suit is ruled by The Emperor. It is the backbone of the tarot, as there are four suits in the Minor Arcana. Also on cards in the Major Arcana, such as the Wheel of Fortune and The World, four symbols are visible. And there are four different schools of astrological signs, fire, earth, air, water. The number four in tarot has strong ties to Mars, the planet of drive and aggression. It is tied to the Fire sign of Aries, which is matched to the card of The Emperor and is associated with fatherhood and leadership. The Wands suit would point towards a spiritual journey.

The Four of Wands depicts a celebration. There are two people on its face dancing and holding flowers. We’ve already discussed in previous cards the ties that flowers and wreathes have to abundance and celebration. This is no ordinary celebration. In the previous 2 cards, we showed the planning and pursuing of a major goal. This is the celebration of the completion of the important milestone.

The Four of Wands is a happy omen of blissful congregation. Now is the time to have a reunion with those closest to you. Whether it be a wedding or graduation, milestones are important to commemorate. The Four of Wands tells you that after the progress made in the Three of Wands, it is time to take a break and bask in your success so far.

The Four of Wands can indicate that you’ve already completed the goal that you set out to achieve in the Two of Wands. This can be anything from quitting smoking to getting a new job. If you’ve struggled to accept yourself in the past, this can be a sign that you’re finally comfortable with who you’ve become and found an inner level of peace. The Four of Wands can also tell of a coming conflict in your close family or friend group. You may experience some discomfort as a result of a new transition.

*In a yes/no reading, the Four of Wands is a yes.