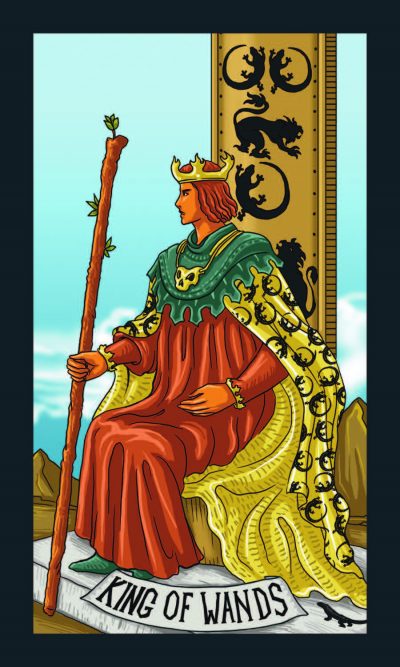 The King of Wands is the master of the domain of fire. He has strong ties to planet Jupiter, which symbolizes expansion and influence. He is associated with the astrological sign of Sagittarius, which is represented by positivity and culture. The Wands suit would point towards a spiritual journey.

The King of Wands is adorned in a cape covered in lions and salamanders, both are a sign of strength and creatures of fire. He holds a budding wand in his hand, a symbol of life and fire in the other hand. The King is fully in control of his strength and comfortable in his position.

The King of Wands represents pure strength and reminds you to be a leader. Unlike the other cards in the Wands suit, the King calls on you to achieve your goals by enlisting others who may be able to help you as opposed to utilizing just your own creativity and vision to manifest your goals. The King of Wands reminds you to have a clear goal you’re working towards and have the foresight to think ahead as to how to accomplish it. The King of Wands upright is blunt, honest and gets things done. You may need to utilize that energy to recruit others to help you move forward on your quest towards enlightenment.

The King of Wands reverse might suggest that you’ve found yourself in a leadership role that you’re overwhelmed by. Be mindful to include others input instead of steam rolling in this time. A wise leader knows when to lead and when to listen to those they are leading. In another interpretation, The King of Wands can warn you that you’re setting unrealistic goals for others and being highly critical. Try to find common ground and help shepherd your people into a common goal, even if your people are just your friends and relatives.

**In a yes/no reading, the King of Wands is a yes.