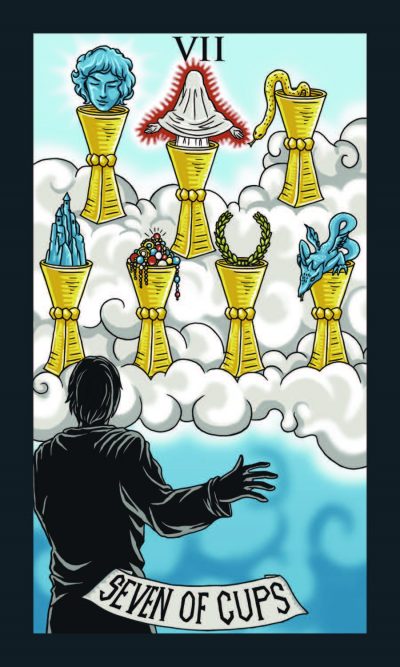 A seven of any suit is tied very closely with the Neptune, which is tied to inspiration. Neptune holds power over dreams and your subconscious mind. This card also has strong ties to the Pisces astrological sign, symbolizing intuition and creativity. The Cups suit would point towards an emotional journey- a new relationship, a new friendship, a new creative project.

The Seven of Cups is visually one of the most literal cards. A figure is seeming to make a choice between seven goblets, representing different choices and outcomes. Some are positive, like the one you can see filled with jewels. Some are negative, such as the one with a serpent’s head. The clouds on the card represent your aspirations and dreams. The message of this card is to make choices based on reality, instead of fantasy or wishes.

The Seven of Cups can be a sign to take a step back and reevaluate new endeavors you’re considering. Whether it’s a new job or relationship, things are not always what they seem and the Seven of Cups is here to remind you that instead of idealizing situations, you need to make your decisions from a place of logic and reality. Make sure your aspirations are things that are realistically achievable. Be wary of anyone offering you an outlandishly grand opportunity at this time, as you may end up with a goblet full of serpents instead. A Seven of Cups can also be a sign of projects unfinished. Are you starting many projects to leave them half done and begin something new?

The Seven of Cups Reversed can appear during times in your life when you need to make serious choices. This may point towards your reluctance to accept the reality you live in, as well as the caveats to the opportunities you may be being presented with. This card is here to reassure you that the resources to make this tough decision are within yourself, and not to concern yourself with other’s opinions. It can also represent later on in the process. It can indicate the end of self-doubt regarding your decision and the peace you’ve found afterwards.

**In a yes/no reading, The Seven of Cups is a maybe.