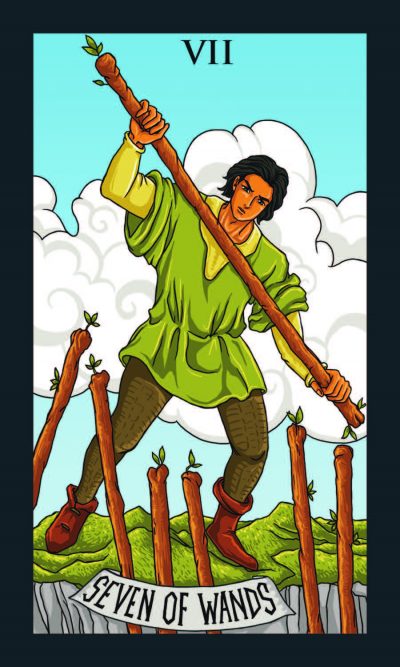 The Seven of Wands is tied very closely with the Sun, the sign of all life and light in the universe. The Seven of Wands also has strong ties to the Leo astrological sign, symbolizing fearlessness and strength. The Wands suit would point towards a spiritual journey.

The Seven of Wands shows a man with a wand on fire, fighting six other wands off. He seems to be defending himself against a small army, approaching him and his territory. The man is wearing one boot and one regular shoe, indicating that he may have been caught unaware or he may be unsure of himself. He is also standing on top of a hill to suggest that he has the advantage in this battle.

The Seven of Wands tells you that after the accomplishments made in the Six of Wands, you’ve drawn the attention of others. One may even be looking to take your place. This threat can present itself as someone wanting to steal your partner or take your position at work from you. This card can appear when you need to defend yourself from someone’s controversial opinions of you. The Seven of Wands tells you to evaluate all options before beginning any new projects or endeavors in this time, and really think about how negative stimuli could cause this new project to come to a crossroads.

The Seven of Wands reversed, shows the main character being overwhelmed by the opposing six wands. He no longer has the high ground or any major advantage in this battle. This can show as a reminder that sometimes things are out of your control and people will not like you or may seek to sabotage you through no fault of your own. Have confidence in yourself and your inner wisdom to know when it is worth it to throw up your hands and give yourself a break from fighting. If you find yourself exhausted and overwhelmed, it might be time to give yourself a break.

**n a yes/no reading, the Seven of Wands is a yes.