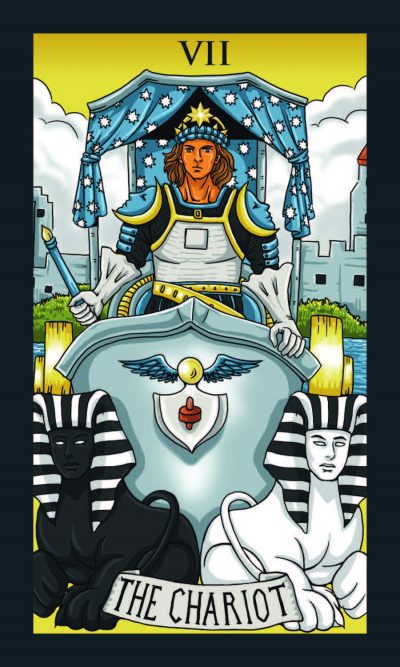 The Chariot tarot card is adorned with a warrior inside of a chariot. His armor is decorated with moon, which some believe to symbolize the Egyptian goddess Isis (“She Who Makes Right Use of the Heart”). Centered in his chest is a square, which has long been the sign of strength of will. His crown made of laurels and stars symbolizes victory over his enemies. The black and white sphinx at his feet, also present the idea of duality, positivity and negativity, or ying and yang.

The reversed Chariot card is quite the opposite. This card calls on you to immediately stop and run in the opposite direction. If things are not moving forward as planned with your most recent project or endeavor, this may be a sign to change course entirely. It can also be a sign that there are obstacles in the way that are stopping you from reaching the finish line. This time is all about self reflection and tells you something is wrong and needs to change to free the path forward.

**In a yes/no reading, the Chariot is a yes.