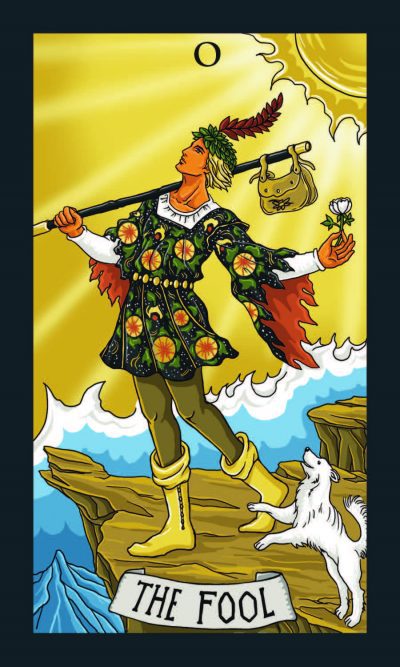 The reason the fool is number 0 of the Major Arcana cards is because of the symbolism of it having unlimited potentials. Major Arcana cards represent growth spiritually, karmic influences and other outside influences that may impact your journey to spiritual enlightenment. Each of these cards is tied to the next and if you were to place them in a circle from 0 to 21, they form a story called The Fool’s Journey. Alternately due to this card’s number being one, some people will place the fool at the back of the deck. The Major Arcana is considered to be the story of the fool, and therefore, he does not need to exist in any specific place. He is tied to each and every card.

When the fool card is pulled, it has a multitude of meanings. Someone’s initial reaction may be offense, but this card can be one of the most positive in a reading. It can represent new and exciting adventures, such as a physical move or a new work environment. It could also represent something figurative as in a new relationship or friendship. The fool is depicted as walking unbothered towards the edge of the cliff to signify the risk that is associated with this card. It may sometimes require a leap of faith to reach the growth this card promises is on the horizon. He is also sometimes depicted as holding a white rose in his left hand to signify his innocence and naivety. His small bundle of possessions is interpreted as his untapped collective knowledge.

If the Fool is pulled in reverse, it is often seen as a warning to the person receiving the reading. This indicates that you need to be more aware of your surroundings, as you may be walking towards the edge of a cliff. This could mean you’re being taken advantage of in some facet of your life. Much like the dog nipping at its owners heals on the card, this reading is to alert you that something may be too good to be true.