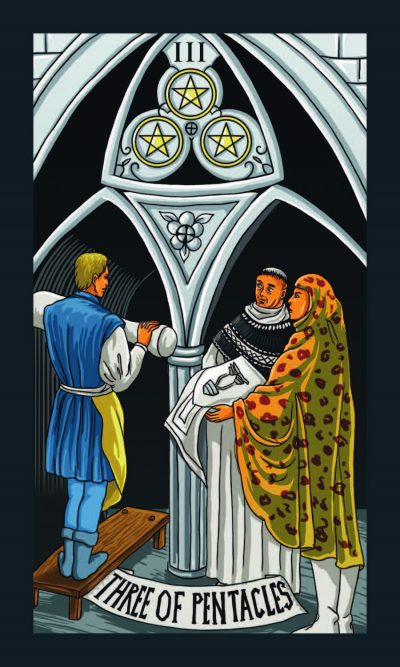 A Three of any suit tells the story of the union of two parts to create a third unique entity. The Three of Pentacles has strong ties to Saturn, which represents boundaries and responsibility. It can be seen as being a very negative omen indicating negative energy ahead. This card also is associated with Capricorns, who are known to be strong-willed and ambitious. The Pentacles suit would point towards a journey of fiscal significance.

The Three of Pentacles shows a young tradesman working on a stone cathedral. There are two figures near him, but different cards depict this scene completely differently. Some show 2 architects, holding the plans for the finished building. Some show a nobleman and a priest, showing how your spiritual and practical sides helping you bring your plans to fruition. This shows teamwork as the three men are working together to bring this project to life, much like the different facets of yourself.

The Three of Pentacles Upright shows a successful beginning towards achieving your goals. It tells of teamwork and a variety of skills that will be needed shortly. You may be struggling to try to do everything by yourself. The Three of Pentacles is here to remind you that you don’t have to. You must allow others to help and not ignore the skills they bring to the table, as they may be ones you are lacking. Much like the stone mason on the card may think the cathedral would not be built without him, so might the architect think that his plans have made it possible. Collaborate with those around you and allow them to mentor you is the message of the Three of Pentacles.

Reversed, The Three of Pentacles foretells of someone or multiple people in your life who may be working against you or each other. It speaks to deep disharmony without your inner circle that may be causing disruptions in your current journey. In work, this could be coworkers who cannot seem to get along to work towards a common goal. Or it could even speak towards your romantic relationship. You may have financial goals that you are unable to meet due to sharing your finances with someone who isn’t willing to stick to a budget or put money away. It can become increasingly frustrated to work against those near you and this is a problem you should resolve before moving forward.

**In a yes/no reading, the Three of Pentacles is a yes.