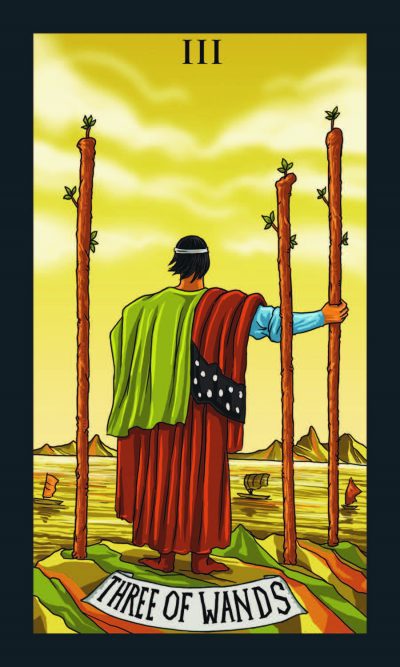 A Three of any suit tells the story of the union of two parts to create a third unique entity. The number The Three of Wands has strong ties to the Planet Mars, the planet of drive and aggression. It is tied to the Fire sign of Aries, which is matched to the card of The Emperor and is associated with fatherhood and leadership. The Wands suit would point towards a spiritual journey.

The Three of Wands shows a man, draped in red and green with his back to the reader. He has moved forward from the planning stage he was in on the Two of Wands. He is looking over the sea at the mountains. He is looking to the future at things to come.

While the Two of Wands tells the story of planning for the journey ahead, the Three of Wands is the next step in that journey. You have made the initial decisions and plans and you’re now starting your journey. The Three of Wands wants you to expand your horizons by trying new things. Now is the time to travel, go back to school, start a new business. All opportunities are open to you. With the imagery of the land and sea, this card points strongly in the direction of exploration and travel. You are yourself the figure, looking out into the distance at the mountains or obstacles ahead. The path ahead will not be without conflict, but you are prepared and you need to believe in yourself to achieve your goals.

The Three of Wands speaks to playing it safe. Are you ignoring opportunities to expand your horizons and embark on a new adventure? Now is the time when creative blocks and obstacles may enter your path. You may feel over committed or overwhelmed with the amount of work this undertaking will actually be. Another interpretation tells of your plans being derailed.

**In a yes/no reading, the Three of Wands is a yes.