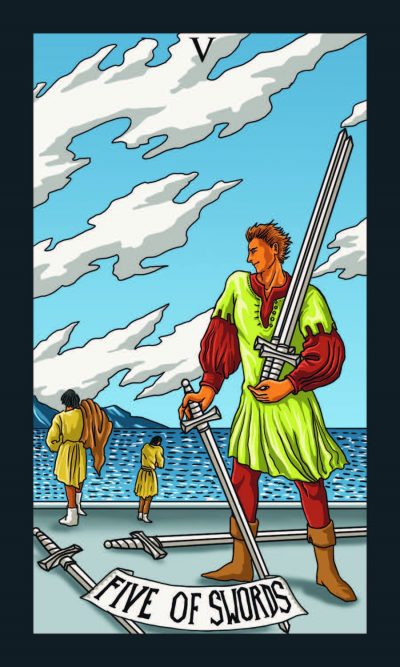 A five of any suit is tied very closely with Uranus, the planet of shock and awakening. The Five of Swords also has strong ties to the Aquarius astrological sign, symbolizing intellect and foresight. The Swords suit would point towards a mental journey.

The Five of Swords shows a man with a smug look on his face. He holds three swords while looking out at two men he appears to have defeated in battle, as they have put down their swords. The clouds in the sky hint that though the battle has been won, there is a war ahead.

The Five of Swords seems to know when you’ve had a disagreement with a close friend or relative. It is a sign that though you may have won a recent argument, all is not well. Are you so desperate to be right that you will set aside your views to reconcile? Even if you’ve won the battle, is it worth the price you’ve paid? Look for common ground with those close to you in this time and work towards solving your differences and moving forward.

The Five of Swords tells of a time when you’re tired of fighting. It can express a conflict in your life that you’ve been dodging that’s building up. This is your opportunity to apologize and make compromises to stop the conflict from rearing its ugly head again. The Five of Swords can also refer to old wounds that have been reopened. Be true to yourself and your own intuition.

**In a yes/no reading, the Five of Swords is a no.