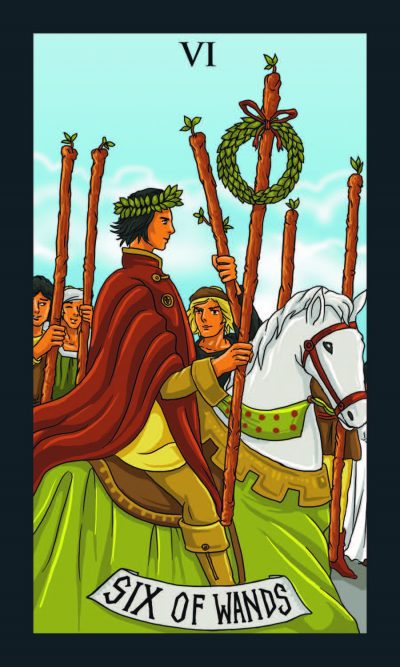 The Six of Wands is tied very closely with the Sun, the sign of all life and light in the universe. This card also has strong ties to the Leo astrological sign, symbolizing fearlessness and strength. The Wands suit would point towards a spiritual journey.

The Six of Wands is wearing a crown of laurels, on his head, a traditional sign of victory. He is riding on a white horse. He appears to be walking through a parade, being recognized for his achievements. He is not afraid to show off his public accolades and receive praise from the group of onlookers.

The Six of Wands reversed has multiple interpretations. One of these is that you’ve achieved a personal milestone that you’d rather keep private at this time. You don’t seek validation through public praise or accolades, but rather you’ve made your own definition of success. At times, the Six of Wands can also denote a certain “fall from grace” that can come in the form of a demotion or public scrutiny. The Six of Wands reversed warns you to stay grounded and do not define yourself through public opinion to avoid a negative self image or even become egotistical when the praise is plentiful.